Podcast time again! It's been two years - today the latest Mega-City Book Club went live with Eamonn and I marking the release of the third book of (one of) Bryan Talbot's magnus opuses (opii?) by discussing the first book, The Adventures of Luther Arkwright. Mastodon (temporary link) Eamonn's thread on the 2000AD Online Forum. … END_OF_DOCUMENT_TOKEN_TO_BE_REPLACED

Light dawns on Alpha's voyage, the barbarians enter the tomb, the lurker gets more than they bargained for and Rogue gets back in to the war.

2000AD salmon leaps on to the 1980s fantasy gaming craze with Sláine, technology fails on Earth, but only when relevant to the plot, ugly lives in Mega-City One, home life with Wulf and goodbye to Azure. 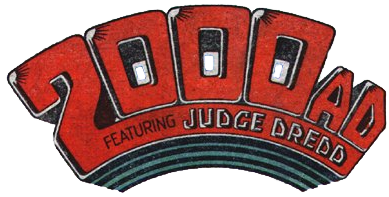 Young Alpha accepts the mission to save the Earth, even if it means saving everybody's lives, Bad Jack is determined to go to Earth, even if they have to kill to get there. The second world war ends - in the twenty second century! What to do with a robot butler? At the Souther / Nort peace pact, aliens attack!

"No, I AM your brother!" as we say a temporary goodbye to Nemesis and a longer goodbye to Termight. Peace in our time on Milicom. The Mega-Citizenry takes the fall. Security Pods chase the Mean Team through the skies of Artificon. Alpha and Sternhammer are back - but for how long? It's time for the Ragnarok Job!

Purity's flashback, Candida's flashback, now it's the turn of Thoth and Satanus! Mystery hands are going to make Rogue war. Judge Dredd: I am the... love? The Mean Team go on the run and being psychic isn't all it's cracked up to be.

The origin story of the Goonie Bird, the end of the original run of Slade, Von Richmann loses his head over Bad Jack leaving the arena, Robin 'Psmith' Smith also leaves, though not for long.

Slade takes to the water, Rogue warns of fireworks, Satanus produces fireworks (oh, and we get to see the face of the character voted best villain at the Eagle Awards), a Mega-vigilante for Mega-City One, the ultimate weapon and Bad Jack has a flashback.

A deal with the devil, Slade discharges from hospital, Tubbs makes it big, crime is a thing of the past and so is the Mean Team.

Exploring the worlds of 2000 AD through design and iconography

Home of the Space Spinner 2000 Podcast!