Programme 3, and after an absence of the Mercury price last week, those Mercurians can get their hands (pincers, tentacles, etc) on this prog.

Yet again we get a splash page showing how mean those Volgs are, as they storm through a British high street, partially obscured familiar brand names visible in the background – not sure what ‘rotts’ is, though I recognise Tesco, Boots and Woolworths.  Silk appeared in three panels the previous week, and now we get to properly meet him, Savage ending up in the Resistance HQ.  Blasco sneaked a signature on the last page.

After a one-page explanation of how to use the Red Alert Survival Wallet (which I don’t own) we launch into the third episode of Flesh Book 1.  For me, the series really starts here, with the arrival of Old One Eye (though at this point she’s just ‘Old’, until Reagan attacks her with the electric goad.

Harlem Heroes follows, and we see how much of a temper Zack Harper has.  Only high point in this episode for me is the panel of the Harlem Sky Slums.  Did I mention I’m not really into sports stories?

Colour centrespread has Dan Dare and the cover star from the previous prog.  Artwork from Belardinelli is good, though nothing really leaps out at me.

In the Nerve Centre we get the first view of working conditions under Tharg, with his treatment of a Sub-Editor Mark IV robot.  Mek-Quake isn’t around, so Tharg has to deal with the robot himself.

Belardinelli makes a second appearance this prog, with a M.A.C.H.1 story.  I’m liking the splash page of a sinking mini-battleship more than the artwork on Dan Dare in this prog.

Lastly is The New You, the entire four-page artwork of which recently came up on eBay.  If I recall, the asking price was £10,000 though no buyer was found.  Second use of putting a Lawmaster on automatic in two weeks, plus use of voice prints.  The fifth page (not really part of the story) is a futuregraph of Carlos’ iconic picture of Mega-City One. 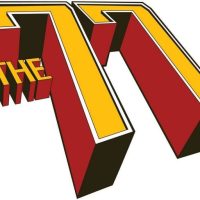 A brand new, retro anthology - A love letter to the comics that made us. With new talent and creators from your childhood.