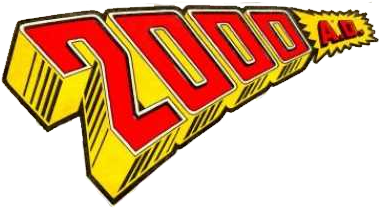 Can’t say I can identify the artist who provided this Supercover.  Some parts are reminiscent of Belardinelli, but it’s impossible to tell past the heavy colouring.  Barney comes to the rescue!  The picture of a couple of meteors about to hit a Mega-City was drawn by Lopez – is this the fate that awaits MC1, or is it a different Mega-City?

Like the M.A.C.H.1 tale in the previous issue, I’m familiar with the Invasion! story as it was reprinted in the earliest sci-fi special I bought.  Still no credits, but I recognise the art style of Mike Dorey, even without Barney.  Bill and Silk have taken refuge in Novatown after hitting a Volgan border camp.  Confusing, as I thought the point of the Hadrian’s Wall story was that they were taking the fight to Scotland, but Novatown is identified as being in the North East?  Anyway, the place is a ghost town since it was hit by a nerve gas attack some months previous to the tale.  The story itself is pretty similar to what we’ve seen for the previous twenty weeks, though as it was the first Invasion! story I read it resonates more with me.  The format needs shaking up though – if only there was a third person to join the duo…

With Dare taking a rest and not Belardinelli not best suited to M.A.C.H.1, the Italian artist has taken over Harlem Heroes (but what is Dave Gibbons up to – we’ll find out a few weeks later).  After a week’s wait, we’ve found out that the Heroes are going to be facing the Teutonic Titans in the final of the Aeroball Championship of the World.  Only three pages long, but Massimo shows us a Teutonic knights-inspired uniform and the Euro-Stadium.  Much better material for him to illustrate than contemporary spies.

Shako returns, and this time his exploits get an episode title – The Night of the White Bear!  Ramon Sola shows the curious bear seeking out that human meat he’s acquired a taste for.  There’s a few deaths, but they’re presented in a ridiculous, comedic way.  The victims here have a habit of narrating their deaths with such lines as “Now he-he’s bitin’ my n-n-nose off” and “he-he’s rippin’… rippin’ me to bits”  I can’t say I like the art that Sola provides here.  It’s looking pretty rushed though I quite like the opening page, with the polar bear looking down on Ice Station Delta.

Over the page we finally get the first of Tharg’s Future Shocks! which sent Alfie insane the previous prog.  Steve Moore provides the script (complete with over-the-page twist) and Blasquez provides the art.  The centrespread colour pages tell of a tribe of red-haired humans killing and looting a tribe of black-haired humans.  The twist is that both tribes were in a terrarium, being watched by giant, intelligent ants.

“John Probe codename M.A.C.H.1” as he is introduced to Paris security over a radio transmission (though I thought the idea of codenames is that you use them instead of real names).  The story is typical – terrorists threaten hostages, Probe is called in, terrorists are defeated.  As with Invasion! there needs to be a change to the status quo for the strip to maintain interest.  The art is curious – I thought I recognised the art style from Battle Action Force (can’t remember which story – One Eyed Jack, maybe).  Barney says Pierre Frisano provided the art, which has its moments but is largely typical work-for-hire.  The lettering is supposedly by John Aldrich, though I suspect that Pierre had some input, as some of the words in the speech bubbles is in the same style as sound effects, and unlike any lettering we’ve seen in the progs so far.

Before the next story we get a page of reader-submitted alien designs, probably redrawn by an art droid (though it doesn’t look like Kevin O’Neill did the redrawing in this instance, though I think he was either art editor or deputy art editor at the time).  Over the page is the next story – in this case the Supercover Saga story, with Lopez’s artwork sans muddy colouring obscuring all detail.  Apparently it is the same Mega-City that Dredd lives in, just fast-forwarded 101 years.  It’s the year 2200 and all mutants have been exiled to an area near the old Kennedy Spaceport (Florida?)  where they seek revenge for being exiled.  The science in the tale is pretty dodgy – the mutants use an antique Saturn V rocket to knock some asteroids from the asteroid belt to hit the city, where the authorities only notice what’s going on when they see a thousand-mile long contrail.  Or in other words, they use a rocket that could just about get to the moon and back to get as far as the asteroid belt, where it knocks a few celestial bodies with such force that they travel back to Earth and create a condensation trail about ten times longer than the atmosphere that could actual hold enough moisture to form condensation (for comparison, the international space station is only 400 km above the Earth’s surface – far short of the thousand miles).  Of course, these stories are just a gimmick to run some cover art, which works better when the cover art is of the standard of Kev’s offering the previous prog, not so much when the pictures are standard sci-fi fare which could have been run on 1950s pulp  mags.

Judge Dredd finishes the prog, with the Ian Gibson-illustrated You Be Your Life.  A nice glimpse of a death game on one of MC1’s pirate stations.  Walter shows a sadistic side as he reveals that the show where contestants are killed is his favourite programme.  Not only does Gibson slip a signature through the management censorship, but he also puts lots of personality into the characters and situations that the poor (but greedy) contestants get put through.  Not a fan of his depictions of Dredd, the Lawmaster or Walter though, but I know they’ll improve as the progs go by.

When I originally posted this I wasn’t doing grailpages and grailquotes, but coming across the reprint in the 2000AD Sci-Fi Special 1983, I just had to add Gerry Finley-Day, Bill Savage: “Quack, quack, Volg!”

Exploring the worlds of 2000 AD through design and iconography

Home of the Space Spinner 2000 Podcast!

Special stories for everyone!